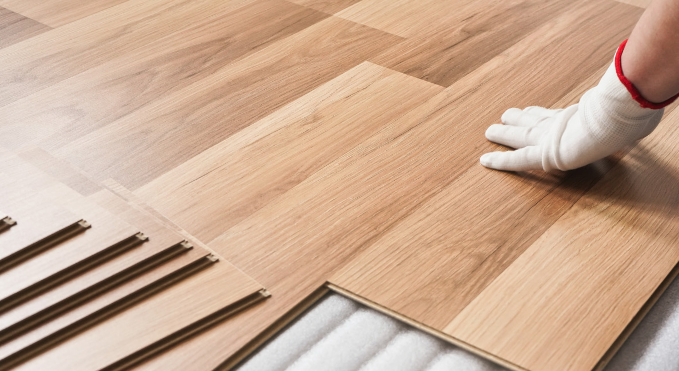 
A manufacturer of hardwood flooring needed a pigment spraying system to spray into the groove of individual floor boards as they moved on the conveyor line. This color is used to help hide minor installation imperfections.

The manufacturer previously used a system with an air brush gun but the nozzle tip tended to clog and this caused an inconsistent spray application. Plugging and shut-off problems were so frequent that workers needed to be on standby all of the time and hourly shutdowns were expected. The spray quality was poor and drips from the nozzle on the production line caused scrap problems.

Spraying Systems Co.’s solution uses an air atomizing nozzle controlled by an AutoJet® E1850+ System. Pigment is supplied to the system by a 40 liter pressure tank. The AutoJet Pigment spraying system triggers the nozzle to spray whenever the conveyor is in motion and an object sensor detects a floor board. No spray is triggered if the conveyor stops or when no board is present.

A 1/4JAUCO automatic air atomizing nozzle provides precise, consistent coverage of the floor boards. It is also equipped with a clean-out needle to prevent plugging of the nozzle orifice. The nozzle also provides positive shut-off to prevent pigment from dripping onto the production line.

The AutoJet Pigment spraying system has improved production efficiency and has made significant savings to the manufacturers’ operation. The higher reliability means operators can now be used elsewhere. The new system is now able to operate for 8 hours straight before they undergo routine maintenance checks. Furthermore, the scrap has been reduced by 50%.

Together, these factors have saved the manufacturer more than € 3,500 per month. This translates into a payback of less than three months on the investment in spray equipment.