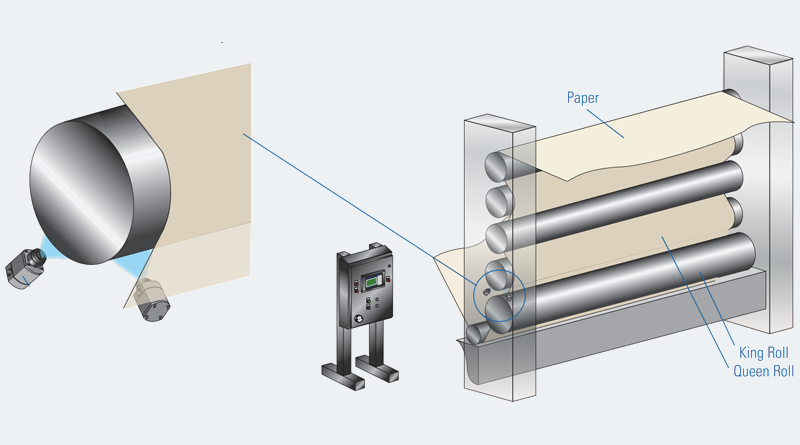 
A manufacturer of linerboard needs to spray water on the queen roll in the calendar stack. The consistent low-flow application of water on the roll at the edge of the sheet wets the roll to prevent the mill’s coated paper from sticking to the roll. Air atomizing nozzles were previously used but because of the high mineral content in the make-up water, the nozzles plugged frequently. When the nozzles failed to apply the water, sheet breaks occurred and resulted in expensive downtime. 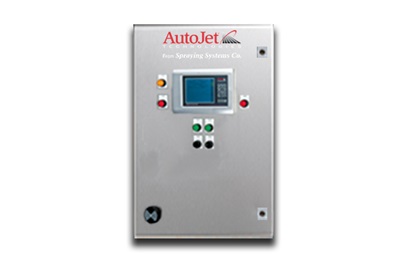 Spraying Systems Co. used four PulsaJet® automatic spray nozzles controlled by an AutoJet® Modular Spray System to solve the mill’s problem. Two PulsaJet® nozzles are mounted on each end of the queen roll to spray the 508mm gap between the edge of the paper sheet and the end of the roll. The AutoJet® Model E2850+ Spray Controller triggers the nozzles to spray whenever the paper machine is in operation and uses Precision Spray Control (PSC) to achieve the desired flow rate based on the machine speed. By precisely adjusting the electrically-actuated PulsaJet® nozzles, an extremely low flow of water is applied to the queen roll using hydraulic flat spray nozzles. The flat spray nozzles have larger nozzle orifices and are much more resistant to plugging than those of the previously used air atomizing nozzles. The system includes an electromagnetic liquid flow meter. Alarms are generated by the spray controller if reduced flow is detected indicating one or more plugged nozzles. Operators can then immediately inspect and clean spray tips without stopping the paper machine and return the system to full flow.

The AutoJet® Modular Spray System provides a consistent coating of water on the queen roll. Mill operators have determined that the PulsaJet® nozzle’s hydraulic flat spray pattern does a better job of wetting and cleaning the roll than the previously used air atomizing nozzles. In addition, the system’s alarm signal notifies operators of possible plugged nozzles, enabling proactive maintenance to prevent sheet breaks. Prior to installing the system, the mill experienced up to eight sheet breaks per month. After installing the AutoJet® Modular Spray System, the number of sheet breaks averaged just two per month. Using the mill’s estimated downtime expense of €10,000 per sheet break, the investment in the new spray system was recouped in less than two months.

Why spray nozzles are essential for a performant cooling process