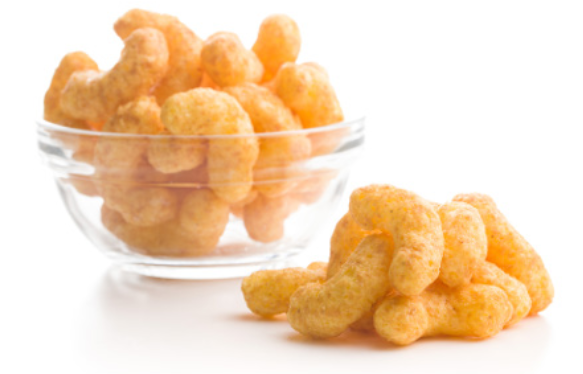 
A snack producer makes corn puffs for markets all around the world. To produce these snacks the production process requires an exact amount of water to be added to a corn flour mixer. During this continuous process the quality and humidity of the flour varies. An optimal result is only achieved by constantly calculating and adjusting the water flow with a precision spray dosing system.

Unfortunately, the locally sourced nozzle and dosing system they were using was difficult to adjust. It was also inaccurate and distributed the water badly. As the quality of the mixing determines the quality of the end-product this system was clearly not capable of handling such a critical application.

As a result, the snack producer started looking for a system that could handle precision spray dosing. At the same time the system needed to deliver a high performant spray all of the time. The customer was also looking for a solution that would prevent clogging and would be easier to adjust and use.

After contacting Spraying Systems our local expert immediately recognized the potential improvements that could be made to the existing solution. As a replacement the recommendation was made to install an AutoJet® 2250+ Modular Spray System with PulsaJet® nozzles, liquid delivery with a diaphragm pump and spray verification by closed-loop control and flow meter.

This solution gives the customer full control over the amount of water that’s being added to the product. This can easily be adapted to meet changing specifications. It also ensures that distribution is even across the flour mix.

After an on-site demo and a lab test on the consistency and uniformity of the final product the customer was convinced that this was the solution they were looking for.

The installation of the AutoJet® Precision spray dosing system immediately delivered the expected results for the snack producer. Because they now have full control over the spraying process there is an increase in product quality and a lot less scrap. The higher accuracy and ease of use also meant that the production cycles could be sped up. So the quality as well as the production numbers are up, a major improvement compared to the previous system.

The new system has also had an effect on costs. Easy control over the dosing process improves efficiency and frees up labour for other tasks. Compared to the old system there’s also a major saving on compressed air – an important sustainability goal of the snack producer.

All improvements add up to a happy customer and an investment that paid for itself in less than 6 months.